The Hall Art Foundation is pleased to announce an exhibition by American artist Torkwase Dyson to be held at its Schloss Derneburg location. In her paintings, drawings and sculpture, Torkwase Dyson explores relationships between bodily movement, geography and architecture, with a focus on the ways that black and brown bodies perceive and negotiate space. Drawn entirely from the Hall Collection, the exhibition will include a selection of drawings, paintings and sculpture created by Dyson over the past five years. This exhibition marks the largest show of work by Torkwase Dyson in Europe to date.

Shown together in Schloss Derneburg’s historic Rittersaal, the works present an overview of Dyson’s approach to abstraction and focus on the idea of liquidity and water as a grounding principle. Drawing on geography, cartography, and architectural theory, Dyson ‘s use of shape, line and plane investigate the built environments that have molded the Black experience. Throughout her practice, her work elaborates on a vocabulary of forms and gestures informed by an evolving theory she has termed Black Compositional Thought. For Dyson, these foundational geometric shapes—the square, the curved line, and the triangle—connect to the spatial histories of Black liberation.

At the center of the exhibition, Tuning (Hypershape, 311-520) (2018), maps the visual and philosophical foundation of her practice in an installation of two hundred small-scale drawings.  Presented in dialogue with Dyson’s sculptural installation, Black Shoreline (2019), and the monumental diptych, I Can Feel You Now (Accumulation/Distribution) (2018), Dyson uses this lexicon to redefine traditional modes of non-narrative formal abstraction.

Additionally, several of Dyson’s atmospheric paintings are included in the exhibition, such as My Mind is Clear of Fear (2016). Layered with acrylic washes, the planes and white lines of Dyson’s paintings gesture toward familiar geometric forms, abstractly referencing the hulls of ships used during the transatlantic slave trade. In these surfaces, Dyson examines power infrastructures that have played a role in environmental racism through segregation, displacement, extraction economy, migration and how architectural spaces can in turn be shaped as a means of spatial liberation.

Similarly, the three angular reflective black acrylic sculptures that comprise Black Shoreline (2019), are part of a group of work that was made in response to the 100th anniversary of the “Red Summer” of 1919, a period of heightened racial violence across the United States, and a specific event that took place in the segregated waters of Chicago’s South Side beaches. When five black teenagers went swimming on Lake Michigan with a homemade raft that drifted near the unmarked boundary between the black and white beaches, tensions between black and white patrons escalated. A white boy threw stones at the black boys, ultimately striking one in the head which resulted in his drowning. For Dyson, Black Shoreline represents the interstitial political and environmental conditions that the boys on the raft created and occupied on that day.

This exhibition will be accompanied by a publication featuring newly translated texts by the artist and in conversation with Arthur Jafa and Mabel O. Wilson. 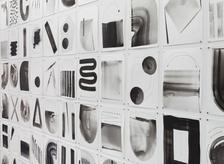 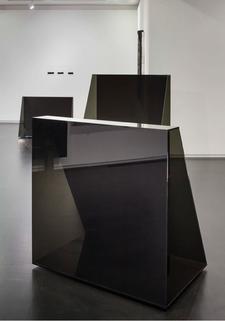