The Hall Art Foundation is pleased to announce an exhibition by acclaimed Antwerp-based German artist KATI HECK to be held at Kunstmuseum Schloss Derneburg. Representing Heck’s output from the past fifteen years and installed in the historic Rittersaal, this survey includes several paintings, a monumental tapestry, and a recent large-scale sculptural installation. With masterful virtuosity, Heck is best known for making lucid yet enigmatic paintings in which densely layered compositions synthesize a multitude of styles and references. Her paintings combine disparate images and influences drawn from literature, music, art history and lived experience, into precisely executed yet open-ended scenes where any meaning or narrative is left intentionally open to interpretation.

In monumentally sized paintings such as Keine Zeit Für Meisterwerke (Himmelfahrtskommando) (2007), Heck combines human figures painted in a highly detailed and classical style with various drawing techniques. Her subjects – typically based on her own friends, family members and acquaintances – are theatrically set within a vast pictorial field in absurd positions and in mysterious interactions with each other. Heck’s sensuous and illusionistic rendering of flesh drifts into passages of caricature, and fields of color (here, the colors of the German flag) transition into brushy and open-ended abstractions. Heck often portrays herself among her subjects and is here depicted in the center of the picture in a horse-like pose being ridden by her husband who is portrayed as an unclothed bearded man. Heck’s constructed world is at once humorous, debauched, and surreal.

In addition to painting, Heck’s practice also incorporates film, performance, photography, and sculpture. Hecksphinx (Ein Selbst in der Warteschlange) (2020) is a sculptural portrait of the artist as a sphynx. In ancient Greek mythology, the sphinx has the head of a woman, the haunches of a lion, and the wings of a bird. Guarding the entrance to the Greek city of Thebes, she is mythicized as treacherous and merciless, and will kill and eat those who cannot answer her riddle. The revived Mannerist sphinx of the late 15th century is depicted with a coiffed head of hair, breasts and is often adorned with jewelry. In her sculpture, Heck depicts herself with arms outstretched and with locks of brown hair cascading around her face. A wine bottle sits in a cavity in one of her hands, while a large round hole opens up the back of her head. On her face, her lips have been replaced by a large red and black smoking pipe – referencing Sherlock Holmes or René Magritte. 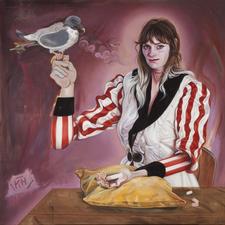 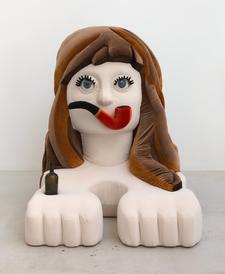