The Hall Art Foundation is pleased to announce an exhibition by the internationally acclaimed artist, Anselm Kiefer, to be held at Kunstmuseum Schloss Derneburg. Anselm Kiefer: Early Works will include approximately forty important and rarely seen artist books, woodcuts, watercolors and small-scale oil paintings created between 1969 and 1982. This show introduces many of the themes and subjects that have become signature to Kiefer’s work, providing an intimate and complementary context for his paintings, sculptures and installations.

Born in 1945 in southern Germany during the final days of the Second World War, Kiefer was among the first generation of German artists to directly confront the country’s troubled past and national identity in the wake of the war and the Holocaust. Incorporating multi-layered references, Kiefer’s work explores how history, literature and myth can be transformed, not only in relation to the rise of the National Socialist agenda, but also as a way to understand broader universal themes of civilization, culture and spirituality. References to Norse mythology, Richard Wagner’s operas, the history of German philosophy and culture, as well as the country’s historical predilection for Romantic landscape painting are some of the recurring themes.

The book – as a physical form and as the principal carrier of ideas and language in the modern world – has always been integral to Kiefer’s artistic production. Für Jean Genet (1969), a 24-page book including watercolors, drawings and original photographs, is one of the important early handmade books on view. It includes a number of self-portraits of Kiefer performing what he called “Occupations” – dressed in his father’s Wehrmacht uniform, parodying the Nazi “Sieg Heil” salute in front of significant monuments and locations throughout Europe, as well as in his studio. In one image, Kiefer gives the salute while facing the ocean from a rocky cliff, a reference to Casper David Friedrich’s painting, Wanderer über dem Nebelmeer (1817). Implicating himself and Friedrich in the historical narrative that exploited German cultural icons to further the Nazi agenda, Kiefer’s project recalls French writer Jean Genet’s contention that “fascism is theater.”

Kiefer’s watercolors also frequently merge historical moments and iconic works of literature. Margarethe-Sulamit (Margarete-Sulamith) (1981) references two figures in Paul Celan’s poem, Death Fugue (Todesfuge) (1944/1945). The refrain “your golden hair Margarethe, your ashen hair Sulamith” refers respectively to the German heroine of Goethe’s Faust, and the Jewish King Solomon’s lover in the Song of Songs. In this poem, Celan, who was interned in a labor camp and whose parents were murdered in a concentration camp, addresses the traumatic experience of the Holocaust. Today, Death Fugue is considered to be a refutation of philosopher Theodor Adorno’s famous claim that “to write poetry after Auschwitz is barbaric.” Adorno eventually regretted and retracted his statement after being impacted by the poetry of Paul Celan.

Kiefer is well known for inscribing passages of text onto his paintings, a characteristic that can be traced back to his earliest small-scale oil paintings. For example, Ich - Du (1971) is comprised of eleven parts in which unidentified pastoral landscapes are overlaid with handwritten inscriptions. Painted the year Kiefer and his first wife, Julia, moved to the mountainous region of Odenwald, the compositions are romantic German landscapes, featuring thick forests, bodies of water, and stacks of felled timber alongside expanses of sky. The autobiographical inscriptions reference Julia, and Kiefer’s soon to be born son, Daniel.

Kiefer began making woodcuts in 1973-74, a medium with deeply rooted associations in Germany to the history of printmaking. Wege der Weltweisheit - die Hermannsschlacht (Ways of Worldly Wisdom - The Battle of Hermann) (1977) makes reference to a battle in 9 CE, when the Germanic tribal leader Hermann ambushed three Roman legions in the Teutoburg Forest, driving the invaders out. Hermann became the original German hero and a powerful symbol for German nationalists, who during the Third Reich used his myth to proclaim the racial superiority of the so-called "Aryan" race. Kiefer’s work is a woodcut of Hermann’s portrait, entangled alongside portraits of other 18th and 19th-century poets, novelists, politicians and other prominent historical figures – as if representing a German cultural and intellectual elite. The busts are collaged together onto a background resembling a forest, with a bonfire ablaze in the center.

“Kiefer’s ‘paths’ through German cultural history do not establish logical or chronological connections, but instead make visible the labyrinthine, branching nature of that fateful German path. These paths are intertwined and directionless, as if to illustrate the obsolescence of the progress-oriented model of history. They establish imaginary connections between individual persons that could just as well run differently.” (Sabine Schütz, Anselm Kiefer – Geschichte als Material, Arbeiten 1969-1983, pp. 210-211)

Anselm Kiefer was born in 1945 in Donaueschingen, Germany. In 1993, he moved to Barjac, in the south of France, where he established a studio-estate that has now become a part of the Eschaton-Anselm Kiefer Foundation. Currently, Kiefer lives and works outside of Paris. He studied law, literature and linguistics before attending the Academy of Fine Arts in Karlsruhe, and later in Düsseldorf, during which time he had contact with Joseph Beuys. Kiefer was selected with Georg Baselitz for the West German Pavilion at the 39th Venice Biennale in 1980 and his work has since been shown in prominent solo exhibitions internationally, including at the Städtische Kunsthalle Düsseldorf (1984); Museum of Modern Art, New York (1987); Art Institute of Chicago (1987); Nationalgalerie, Berlin (1991); Metropolitan Museum of Art, New York (1998); Fondation Beyeler, Basel (2001); Grand Palais, Paris (2007); Guggenheim Bilbao (2007); Royal Academy of Arts, London (2014); Centre Georges Pompidou, Paris (2015); Bibliothèque Nationale de France (2015); Albertina, Vienna (2016); NSU Art Museum Fort Lauderdale, Florida (2016); State Hermitage Museum, St. Petersburg (2017); Rodin Museum, Paris (2017); Met Breuer, New York (2018); and Astrup Fearnley Museet, Oslo (2019). In 2013, the Hall Art Foundation opened a long-term installation of sculpture and paintings by Kiefer in a specifically repurposed 10,000 square-foot building on the campus of the Massachusetts Museum of Contemporary Art. In 2020 Kiefer was honored with a permanent installation of his work in the Panthéon in Paris commissioned by President Emmanuel Macron. Most recently, an exhibition of monumental works dedicated to Paul Celan was on view at the Grand Palais Éphémère in Paris (2021). 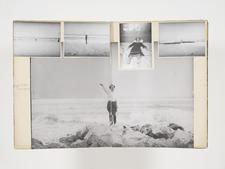 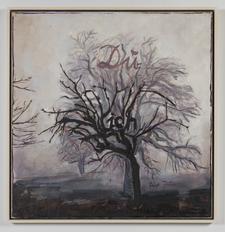 Oil on canvas laid down on canvas, 11 parts 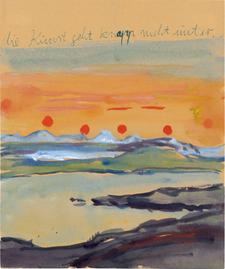 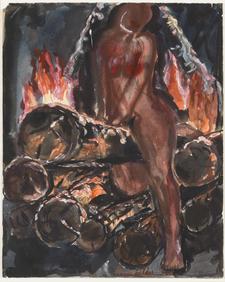 Pencil and watercolor on paper 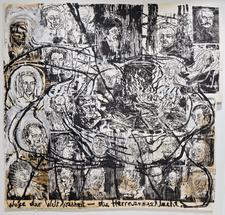 Woodcuts on paper laid down on synthetic fabric 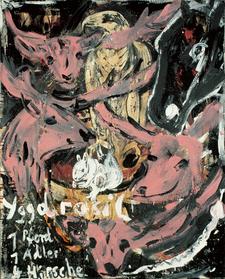 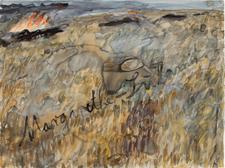 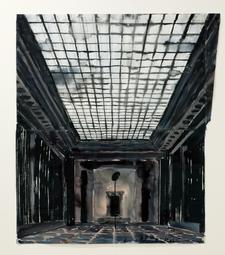