The Hall Art Foundation is pleased to announce a survey by the internationally acclaimed American artist Susan Rothenberg (1945-2020) to be held at its Schloss Derneburg venue. Throughout the past fifty years, Rothenberg was an independent figure who continued to challenge and extend painterly conventions, meshing abstraction with representation and confounding figure and ground. This show will include over 20 paintings that trace the evolution of Rothenberg’s figurative, emotionally charged and gestural style from her iconic horse paintings of the 1970s to works completed in the past decade.

In 1975 Rothenberg had her first New York solo at 112 Greene Street, an alternative space in SoHo which consisted of three large paintings of horses, including Algarve (1974), now presented in Germany for the first time in almost forty years.  At nearly 3 meters tall, Algarve depicts the simplified outline of the front half of a horse in profile. The horse’s body is painted in a brushy and muted off-white tone, identical to the canvas’s ground. Black triangles painted below the horse’s neck and legs further flatten the imagery, eliminating any illusionistic effect.  Rothenberg’s horse paintings, considered surrogates for the human body, became emblematic of new figuration in the 1970s, culminating in the Whitney Museum exhibition “New Image Painting” in 1978. As a pioneer and the only woman, Rothenberg was also represented with three horse paintings, one of which was Algarve, in the legendary “Zeitgeist” exhibition at Martin-Gropius-Bau, in Berlin in 1982.

In the 1980s, Rothenberg’s practice became more intuitive and expressionistic, inspired by what was around her and her own personal experiences. She introduced a wider diversity of color to her work while continuing to explore different ways of organizing pictorial space and in particular, the body in motion. In works like Trumpeter (1984-85), the action of a trumpet player moving his instrument up-and-down is depicted in lush, heavily worked fields of color punctuated by flashes of white paint. Conversely, in the later Caput Violet (1989-90), the body has been arrested in motion in an impossible “U-turn” pose where the figure’s legs descend from the torso and bend back up behind the body. Paint handling and brushwork began to convey more movement and urgency, depicting subjects that inhabit tensely activated spaces.

After moving from New York to New Mexico in 1990, Rothenberg’s subject matter reflected her new physical surroundings—animals and the landscape. In works such as Dog and Snake (2004-05), animal imagery inhabits intensely worked fields of color, where bodies are fragmented and abstracted. Painted in a palette also influenced by the desert landscape, these works continued to convey a dynamic sense of movement across the picture plane.

Towards the end of the 2000s, Rothenberg returned to using the human body as her primary subject. Juxtaposed against minimal yet heavily worked backgrounds, works like Blue Flash (2009-10) and The Master (2008), depict boldly colored fragments of the body that have been isolated, upturned and dispersed across the picture plane. Here, bodies become shapes, and Rothenberg once again demonstrates how the representation of the figure can be transformed into a study of space and form.

Susan Rothenberg was born in 1945 in Buffalo, New York and received a BFA at the Fine Arts School at Cornell University in Ithaca, New York. Rothenberg’s work is recognized internationally and has been shown in the United States and abroad. Early solos took place at Kunsthalle, Basel (1981-82), the Stedelijk Museum, Amsterdam (1982) and the Los Angeles County Museum of Art, which traveled to seven institutions in the US and abroad (1983-85). A retrospective organized by the Albright-Knox Art Gallery, Buffalo traveled to the Hirshhorn Museum, the Saint Louis Art Museum, Museum of Contemporary Art Chicago, Seattle Art Museum and the Dallas Museum of Art (1992-94). Other exhibitions include the Museo de Arte Contemporáneo in Monterrey, Mexico (1996-97) and “Susan Rothenberg: Paintings from the Nineties” at the Museum of Fine Arts, Boston (1999). A survey, “Moving in Place,” was organized by the Modern Art Museum of Fort Worth, and traveled to the Georgia O’Keeffe Museum, Santa Fe and the Miami Art Museum (2009-11). Her work can be found in important public collections around the world, including Albright-Knox Art Gallery; Hirshhorn Museum; Los Angeles County Museum of Art; The Metropolitan Museum of Art; Museum of Fine Arts, Houston; The Museum of Modern Art, New York; Museum Moderner Kunst Stiftung Ludwig, Vienna; National Gallery of Art, Washington, D.C.; Stedelijk Museum; Tate, London; Walker Art Center, Minneapolis; Whitney Museum, New York, and Crystal Bridges, Bentonville, Arkansas.

Susan Rothenberg is represented by Sperone Westwater, New York, where she showed regularly from 1987 until her death in 2020.

This exhibition will be accompanied by a new publication featuring texts by the artist and Peter Schjeldahl. 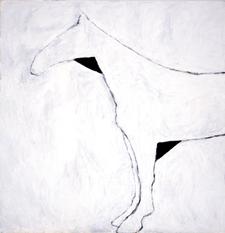