The Hall Art Foundation is pleased to announce an exhibition by American artist, Sante D’Orazio, to be held at its Schloss Derneburg location.

Beginning in the 1980s and for a period of about thirty years, D’Orazio became famous for his photographs of supermodels and celebrities. Executed in a notoriously provocative and intimate style, his work was hailed by the fashion and advertising worlds and appeared regularly in the most prominent European and American fashion magazines. Despite this widespread acclaim, in the early 2000s, D’Orazio decided to pivot from commissioned commercial work and adapted his then-signature style to his own subjects and ideas.

Created in 2007, Dorazio’s Priests are large scale, black-and-white photographic portraits of contemporary artists adorned in Catholic robes and posing with various objects of the faith. Twelve works from the series are on view, and participating artists include Nobyuoshi Araki, Matthew Barney, Maurizio Cattelan, Francesco Clemente, George Condo, Tom Friedman, Damien Hirst, Alex Katz, Jeff Koons, Richard Meier, Ed Ruscha and Philip Taaffe. Described by D’Orazio as “the people who are creating modern-day objects of worship”, Priests investigates the role of artists in the 21st Century, who historically have often acted as intermediaries between heaven and earth in their ability to represent the intangible and convey a sense of the sublime.

In a text titled A Letter to Rome about the series, Francesco Clemente wrote:

When Sante D'Orazio dresses these distinguished artists as Priests he doesn't imply that artists take vows or can minister sacraments. Rather he is reminding us that artists share with the Priests the acceptance of their helplessness, the acceptance of their difference, and the will to witness the folly of men with equanimity if not with kindness.

Sante D’Orazio was born in Brooklyn, New York in 1956 to Italian immigrant parents and was raised in a Catholic home. He first trained as a painter and attended Brooklyn College while studying with photographer Lou Bernstein, a member of The New York Photo League, and painter Philip Pearlstein. His work has been exhibited widely in museums around the world, including Haus der Kunst, Munich, Kunst Haus Wien, Vienna, the Los Angeles County Museum of Art, and NRW Forum in Düsseldorf, among others. His work has also been shown in galleries in Berlin, London, Los Angeles, New York, and Tokyo. D’Orazio currently lives and works in New York. 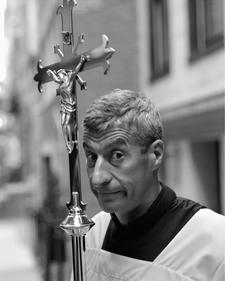