The Hall Art Foundation is pleased to announce an exhibition by French artist Eugène Leroy to be held at Kunstmuseum Schloss Derneburg. The show will include approximately a dozen paintings spanning four decades of the artist’s work from the early 1960s to the late 1990s. Using classical genres from the history of art as his subjects, Leroy is known for capturing an ephemeral quality of light in his deeply textured, richly colored and abstracted compositions.

Leroy (1910 - 2000) lived most of his life in Tourcoing, France, near the Belgian border. From the beginning of his career, he drew inspiration from the work of painters such as Giorgione, Rembrandt, Hugo van der Goes, Malevich and Jean Fautrier. Always painting from life, Leroy’s compositions are based on classical subjects such as still-lives, landscapes and the human figure. His paintings are dense and heavily labored, with layers built up slowly over an extended period of time. Sculpted in paint, his subjects ultimately dissolve, becoming barely discernible amidst an overall study of color, form and light.

Eugène Leroy was born in 1910 in Tourcoing in northern France, where he spent the majority of his life. At a young age he traveled to Rome and by the age of 21 had studied of the École des Beaux-Arts in Lille and in Paris. Leroy exhibited in the Salon d’Automne in 1946 and 1947 and from that time exhibited his work regularly in Paris. Leroy’s work can be found in major American and European collections and has been featured in exhibitions at the Musée d’Art moderne de la Ville de Paris (2008); the Albright-Knox Art Gallery, Buffalo, New York (2000); The Power Plant, Toronto (1999); Musée d’Art moderne et d’Art contemporain, Nice (1991); Stedlijk Van Abbemuseum, Eindhoven (1988); and Museum van Hedendaagse Kunst, Gent (1982), among others.  His work was included in the Sao Paulo Biennale (1990), in documenta IX in Kassel (1992) and in the Venice Biennale (1995). Leroy died in Wasquehal, a suburb of Lille, in 2000. The Musée Beaux Arts Tourcoing was renamed MUba Eugène Leroy in his honor in 2010. 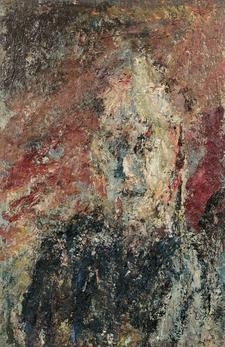 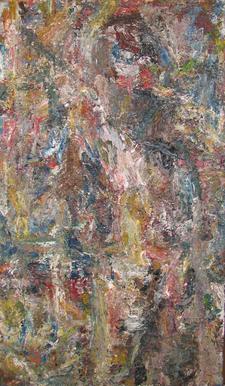 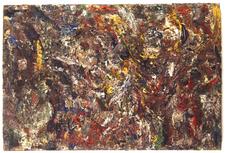