The Hall Art Foundation is pleased to announce an exhibition by American artist Deborah Brown to be held at its Schloss Derneburg location. Inspired by the landscape around her Brooklyn studio, and composed of loose and expressive brushwork punctuated by dynamic lines and fields of color, the show will include approximately thirty Shadow Paintings, all created within the past year.

Brown’s Shadow Paintings derive from her daily walks with her dog, Trout, through the neighborhood that surrounds her studio, which is located in Brooklyn’s East Williamsburg Industrial Zone, during the pandemic. The area is dominated by one-story warehouses covered with colorful street art, murals and graffiti.  Although the district is only a few miles from Manhattan, the absence of tall structures allows for uninterrupted vistas down multiple blocks, often in several directions at once.

Structured around absence, the human protagonist in Brown’s Shadow Paintings is represented by a shadow, which is in turn connected by a leash to a dog in the foreground. Winter light and the low angle of the sun extend the shadows far into the distance, creating odd distortions and evocative patterns. Brown depicts the multifaceted structures present in urban spaces – stop signs, telephone poles, light stanchions, fences, grates, sidewalk paving and spray-painted symbols. These are paired with Dionysian graffiti that covers many of the low-rise structures.

In works like White Street (2021), Brown places the viewer in the role of a protagonist navigating a landscape devoid of human inhabitants.  The absence of life presents a scene in which the protagonist and her dog might be survivors among the last inhabitants of a strange landscape. This theme takes on added meaning after a year of quarantine and isolation created by the global pandemic.

Deborah Brown was born in 1955 in Walnut Creek, California and grew up in Pasadena, California. She received a BA from Yale University and an MFA from Indiana University.  Solo exhibitions of her work have been presented in galleries in the United States and Europe, including König Galerie, Berlin, Germany (upcoming); Scott Miller Projects, Birmingham, Alabama; Anna Zorina Gallery, New York; Unit London, UK; Gavlak Gallery, Los Angeles and Palm Beach; The Lodge, Los Angeles; Nancy Littlejohn Fine Art, Houston, TX; and Lesley Heller Gallery, New York, among others. Brown has been a tenured professor at Carleton College and a visiting artist and lecturer at Penn State University, Hunter College, Pace University, Columbia University, Maryland Institute College of Art, Yale University and Art Omi.  Her work can be found in numerous institutional collections, including the Indianapolis Museum of Art, the DeCordova Museum and Sculpture Park, Lincoln, Massachusetts, the Bass Museum of Art, Miami and the Orlando Museum of Art, Florida, among others. Brown currently lives and works in Brooklyn, New York. 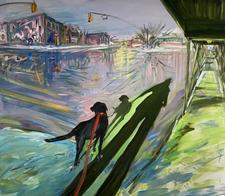