The Hall Art Foundation is pleased to announce, “Cuts Into Space”, a group exhibition including over two dozen historic paintings and sculptures by Carl Andre, Alan Charlton, Michael Heizer, Ulrich Rückriem, Fred Sandback and Richard Serra. Employing a unique and specific set of strategies, each artist explores and expands on Minimalist principles such as geometric order, repetition, and space and void. Reduced to their most essential elements, their works exist in relation to the space they inhabit. The title of the show comes from a statement by Carl Andre: “I DO NOT CUT INTO MY ELEMENTS, MY ELEMENTS ARE CUTS INTO SPACE”.

Carl Andre (b. 1935) is internationally recognized as one of the leading figures of Minimalism since the 1960s. Andre’s disarmingly simple geometric arrangements using found, industrial material carefully consider form, space, and environment. The freestanding sculpture, Sulcus (1980), is comprised of eight units of Western red cedar in equal measure that have been assembled against each other to create a carefully balanced geometric structure with positive and negative spaces. Andre employs a similar strategy on a monumental scale with the tiered structure, Cascade. Originally assembled in 1984, the work is comprised of 550 concrete blocks of equal size stacked in rows of descending height. The seams between the blocks are not interweaved but abutted in even rows and columns creating an inherent vulnerability to the overall structure. In contrast to the heavy concrete material from which it is made, the sculpture’s title and downward-sloping silhouette suggests free-flowing movement, and its form resembles the entryways of Greek temples, like the Pergamon Altar. Installed on the grounds of Kunstmuseum Schloss Derneburg, Cascade sits between the castle and adjacent barns, offering a new vista towards the neighboring fields.

Alan Charlton (b. 1948) is a conceptual artist known for methodically grouping individual, monochromatic grey canvases of equal size. By working within a strict set of parameters – including a stretcher depth of 4.5 cm, the use of cotton canvas, and the color grey – Charlton’s work investigates questions of composition, spatiality and form. Untitled (1996) is comprised of 7 monochromatic, horizontally aligned and evenly spaced panels. Geometric balance is central to Charlton’s arrangements, and he uses precise mathematical drawings as studies for his compositions. Charlton applies paint to his canvases in multiple layers, resulting in an overall even tone that prioritizes form over gesture. Towering over the viewer at a height of nearly 2 meters, Untitled highlights the technical achievement of flatness, and mirrors the approach of Minimalist sculptors who often worked in series with equal sized components, denying any intention of imagery.

While Michael Heizer (b. 1944) is primarily known for making monumental land works, he began his career painting geometric canvases with polyvinyl latex. Untitled No. 6 (1974) is a vertically oriented painting over three meters tall. An interior off-white rectangle is bordered with a thick black band applied by a roller that creates a perimeter conceptually focused on positive and negative forms. The resulting contrast suggests a passageway and elicits themes of presence and absence which resonate throughout Heizer’s sculptural practice. In his sculptural works, such as 45° 90° 180° (#5) (1982) and Circle II (North Dakota) (1978), Heizer combines sourced natural objects with geometric intervention. In such works, the assembly of geometric shapes suggests natural and unexplained phenomena, the language of primitive civilizations, as well as imagery from contemporary science fiction.

The sculptor Ulrich Rückriem (b. 1938) employs stone cutting techniques that intentionally make his process prominently visible. Rückriem trained as a traditional stonemason in Düren, later finishing his apprenticeship in the workshop responsible for the Cologne Cathedral. Following a meeting with Carl Andre in New York, Rückriem began using stone blocks in his sculptures – first taking whole blocks directly from a quarry which he then cuts, splits and marks in various ways, ultimately reassembling the parts into a new whole. Untitled (1987) is comprised of multiple blocks of granite cut from the same slab and reassembled. The individual components are stabilized only by their weight and recall primitive methods of wall building. Incised with a geometric pattern of bore holes from the stone cutting process, the natural texture and coloring of the stone is highlighted. The outdoor sculpture, Untitled (1986), assembles three vertical blocks of granite onto a fourth horizontal slab. With the cutting marks once again left intentionally visible, Untitled showcases all four processes employed by a stonemason: splitting, cutting, honing and polishing. The vertical blocks are positioned such that a recessed void is left in the central space, perhaps suggestive of a spiritual interior.

Fred Sandback (1943 – 2003) is best known for using thin material, including rope and yarn, to create site-specific three-dimensional drawings, in which the environment is a substantial component. In the installation, Untitled (Four-part Construction) (ca. 1981-82), Sandback aligns four constructions of yarn in different shapes and colors along a straight axis. Two constructions that extend along the floor and ceiling are interspersed with simple vertical lines. The use of different colored yarn (blue, yellow, orange, and black) offsets the invisibility of the thin material and differentiates between the constructions. In contrast to minimalist artists who work with heavy material, Sandback’s use of yarn is economic in both resources and volume, while maintaining capability to fill a space.

Throughout his career, Richard Serra (b. 1938) has produced drawings that relate to the monumental sculpture projects for which he is well known. The drawing, St. Louis I (1982) mirrors the weight of a related installation of Cor-ten steel plates developed by Serra for a downtown park in St. Louis. In its dense application of media, with an exposed left margin ending in diagonal draws at the corners, the simple and abstracted form of St. Louis I suggests at once a void and an impenetrable obstruction, both characteristics used to describe Serra’s large-scale sculpture. 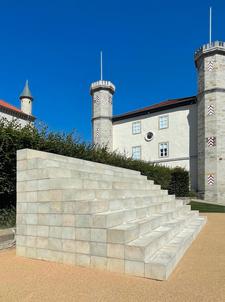 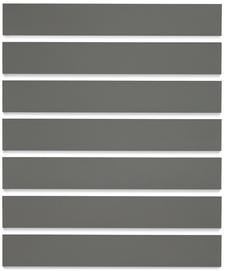 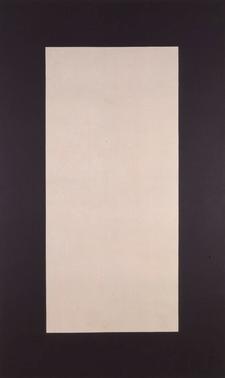 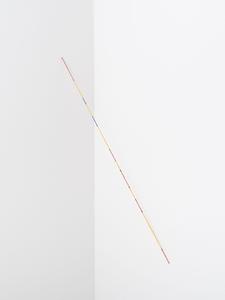 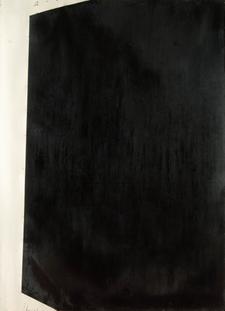