The Hall Art Foundation is pleased to announce an exhibition by Vermont artist, Terry Ekasala, to be held at its galleries in Reading, Vermont from 15 May – 22 August 2021. Known for creating expressive, abstract paintings that border on representation, this exhibition will include about a dozen new large-scale paintings and works on paper. Often delineated with thinly painted lines, Ekasala populates her compositions with vibrant and at times translucent sections of color juxtaposed or layered across each other.

Intuitive painter is used frequently to describe painters, I suppose I fit in that category. When first approaching a painting, I have no preliminary ideas, sketches, or plan for an image. Like many abstract or semi-abstract painters, I start by laying down color and shapes freely, always intrigued by how colors react to one another. Sometimes I arrive at a stimulating image fairly quickly but need more surface work, which generally means sacrificing parts of the painting that please me in order to get more coherence in the entire piece. In this working out period I’m always searching for new directions, something I don’t know yet. I can get irritated, anxious, lost - like I’ve really lost the recipe. Incredible - as much as I have been painting, it still happens. Usually, I have to hit this wall so to speak and realize AGAIN, it’s happening, and I lighten up, let go, even if I have to charge at the painting, scrape half the paint off, cover up parts I’ve worked on for a long time. Letting go and allowing intuition to take over is when the best work happens. In the past few years, I have introduced painting on paper with water-based paint into my daily studio routine. It’s a whole different ball game after years of working with oil on linen. This practice has been nothing short of enlightening for me. The immediacy, spontaneity, different absorption, gave me another angle to experiment in all senses - texture, form, subject. I think mostly there is more abandonment, allowance, and playfulness in my more recent work. Artist Steve Gibson once wrote “I really enjoy looking at Terry Ekasala’s work. Her halting line and elusive color combinations seem to always have just the right amount of deliberateness and ambiguity.” Both intentionally and unintentionally the works carry bits of suggestions from the preoccupation of my daily life and interests. -Terry Ekasala

Terry Ekasala was born in Weymouth, MA in 1962. She received her undergraduate degree from the Art Institute in Ft. Lauderdale, Florida. Ekasala first lived in Miami Beach in the early to mid 1980s where she was a part of the Artifacts Artist Group which staged multimedia art happenings in unconventional settings throughout Miami. In 1987, she moved to Paris where she also became involved with the local artist community for the next fourteen years, before finally moving to Vermont in 2001. Her work has been exhibited widely in Paris, Berlin and New York. Most recently, solo presentations of her work have been held at Catamount Arts in St. Johnsbury, at Burlington City Arts, with Metalstone Gallery in New York City, at Matter & Light in Boston, and at the Piermarq Gallery in Sydney, Australia. In 2018, the Hall Art Foundation presented her work as part of a group show, Made in Vermont. Her work can be found in numerous private collections. Ekasala now resides in East Burke with her family, continuing to work on large and small abstracts in what she calls her dream studio on a mountainside in nearby West Burke. 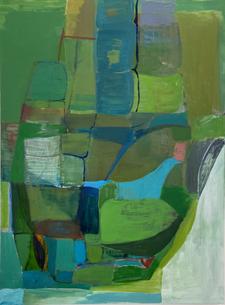