The Hall Art Foundation is pleased to announce an exhibition by British-born American artist Malcolm Morley to be held at its Schloss Derneburg location. A pioneering figure in international contemporary art, Morley is acknowledged as one of the founders of Super-Realism, which developed as a counterpoint to Pop Art in the 1960s, yet also as an artist who deliberately broke away from the stylistic innovations which brought him this initial fame. Over the past sixty years, Morley’s practice has continually evolved, his paintings becoming ever more colorful, expressive and distinctive. This exhibition, which includes paintings, sculptures and works on paper spanning the artist’s career from 1964 to the present.

Born and trained in England, Morley moved to the United States in 1958, where he devised a wry form of realism that utilized found photographic material with vernacular subject matter. HMS Hood (1964) replicates a photograph Morley saw in a book in a New York City library in a style mimicking that of a newspaper print. In Cristoforo Colombo (1965), a painted white border around the image of the ocean liner affirms that the subject of Morley’s painting is a postcard of the ship rather than the ship itself. In the 1970s, the crisp Super-Realist structure of Morley’s paintings loosens and his brushwork becomes more visible and expressive.  Remembrance of Things Past (1976) is a later take on Cristoforo Colombo in this more painterly style, and includes a garland of painted text tumbling out of the composition into the painted border.

Morley’s use of wide-ranging source material to produce compositions with complex effects of flatness and depth informs his work across the decades. In the 1980s, loose, colorful and energetic paint handling often depicts exotic animals, birds and fish. In French Foreign Legionnaires Being Eaten by a Lion in the Sahara Desert (1986), the soldiers’ dark, flattened forms recede behind the vigorous, bright paint splatters of the charging lion. In the early 1990s, paper models hand painted with watercolor became the source material for Morley’s compositions, and in some cases would be attached directly to the surface of the canvas. In Man Overboard (1994), three watercolor-on-paper flags, affixed to the surface of the canvas, curiously recede from the foreground, where two painted flags signal “man overboard.” Theory of Catastrophe (2004) and Monster Energy (2007) belong to a group of work whose slick imagery derives from magazine and newspaper photos of figures from the contemporary sports world and catastrophes. In Monster Energy, Morley presents the figure of an athlete as a mythic hero.

In his most recent series, Morley presents vibrant, often anachronistic scenes of medieval knights engaged in battle. In Medieval Divided Self (2016), which features a World War I biplane alongside a 16th-century Spanish galleon, symbols from different historical periods collide. In these new paintings, Morley continues his thirty-year tradition of using models as his source material, forging unexpected relationships between often-incongruous objects.

Malcolm Morley (b. 1931, London) studied at the Camberwell School of Arts and Crafts and the Royal College of Art. Since his first show in New York in 1964, he has had numerous exhibitions in Europe and North America and has participated in many international surveys, including documenta 5 (1977) and 6 (1977). In 1981, Morley’s work was included in the Royal Academy’s pivotal group exhibition, A New Spirit in Painting. His first retrospective was organized in 1983 by the Whitechapel Art Gallery, London, and travelled to the Museum of Contemporary Art, Chicago, and the Brooklyn Museum, New York. In 1984, Morley was awarded the first-ever Turner Prize. Subsequent noteworthy presentations of Morley’s work include an exhibition of watercolors at Tate Liverpool, which travelled to the Kunsthalle Basel, Bonnefantenmuseum in Maastricht, and the Parrish Art Museum in Southampton, NY (1991-92); a retrospective at the Musée national d’art moderne, Centre Georges Pompidou, Paris (1993); an exhibition organized by Fundación La Caixa, Madrid, which travelled to the Astrup Fearnley Museet, Oslo (1995-96); a retrospective at the Hayward Gallery, London (2001); and the survey “The Art of Painting” at the Museum of Contemporary Art, North Miami (2006). In 2012, the Yale School of Art, New Haven, Connecticut, presented Malcolm Morley in a Nutshell: The Fine Art of Painting 1954-2012, and the Parrish Art Museum, Water Mill, New York, mounted an exhibition exploring the important role of paper in Morley’s art-making process. In 2013, an exhibition curated by Sir Norman Rosenthal took place at the Ashmolean Museum, Oxford, in partnership with the Hall Art Foundation. His work can be found in museum collections worldwide. Morley lives and works in Long Island, New York. 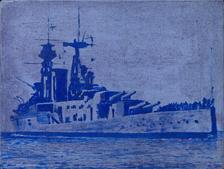 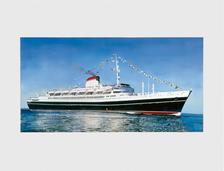 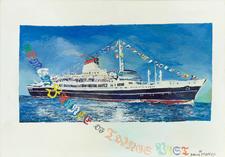 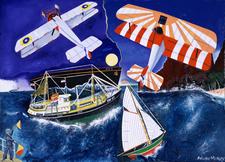 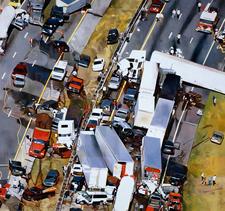 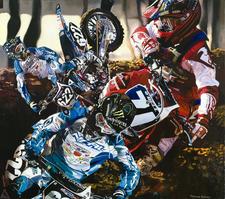 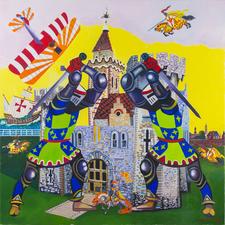