The Hall Art Foundation is pleased to announce an exhibition by Brazilian-Japanese, New York-based artist, Lydia Okumura. For over fifty years, Okumura has employed geometric abstraction to explore one’s understanding and experience of space, expanding its possibilities through form and color. Using materials such as string, wire, acrylic paint, glass, aluminum, charcoal and graphite, Okumura conceives site-specific installations that project from the walls and floors, blurring the boundary between two and three-dimensional space. This exhibition features approximately 15 works that span nearly three decades of Okumura’s career, including historic paintings, sculptures and large-scale installations.

Born in São Paulo to Japanese parents, Okumura’s varied influences, including calligraphy, Japanese painting, the Concrete and Neo-Concrete Brazilian art movements, as well as an exposure to American and European conceptual art, have resulted in a unique cross-cultural approach to minimalism. A series of Okumura’s sculptures titled The Appearance were made in 1976 shortly after she moved from Brazil to New York. Each sculpture aligns simple graphite wall drawings with lines of string attached to the floor. The three-dimensional shapes created from these arrangements – including a cube, a triangle, and paired rhombi - are simultaneously voluminous and materially light weight. Okumura’s ability to transform space with minimal means continues in the large-scale installation, In Front of Light, São Paulo Biennial 1977 (1977). Here, Okumura assembles overlapping, inward facing triangles shaped with white cord along a long, horizontal wall painted black. The cords are nailed in specific measured orientation so that the triangles culminate in the center with increased frequency, producing interconnected geometric forms. The installation is further complicated by seven triangular pieces of glass which jut out from the wall in a semi-circle, extending the installation further into space.

Okumura’s sculptural works from 1984 marked a further evolution in color and material sensibility. Labyrinth (1984) is a large rolled and freestanding structure comprised of steel mesh with painted overlapping forms in bright primary colors. First realized in 1984 at the Museu de Arte Moderna in São Paulo, the sculpture was the largest that the artist had made to date, and the first that visitors could enter and move within. This installation was also the first time that Okumura incorporated industrial raw materials like the steel mesh in her work. In Labyrinth, the steel mesh encircles an interior space that is drawn out on one side, creating a passage for viewers to enter the sculpture. Though the mesh is composed of minute circular voids, the material overlaps result in a saturated color field that visually shifts as the viewer moves around and inside the sculpture.

Born in 1948 in São Paulo, Brazil to a Japanese immigrant family, Lydia Okumura's interest in art was awakened by her father, a trained calligrapher. Before relocating to New York in 1974, Okumura studied at the FAAP School of Visual Arts in São Paulo, staged her first solo exhibition in 1968 at Galerie Veranda in Brazil at the age of nineteen, and was invited to participate in the 1973 São Paulo Biennial as part of the collective Equipe3. Once in New York, Okumura continued her studies at the Pratt Graphics Center. Okumura has participated in five São Paulo Biennials between 1973 and 1984, as well as numerous gallery and institutional exhibitions across the United States, Latin America and Japan. Her work was shown in an important solo exhibition at the Museu de Arte Moderna, São Paulo in 1984 and, more recently, was the subject of an extensive touring US retrospective, Lydia Okumura: Situations, organized by the University of Buffalo (New York) in 2016. Okumura currently lives and works in New York, and is represented by Galeria Jaqueline Martins, São Paulo and Brussels. 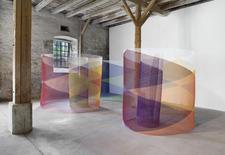