The Hall Art Foundation is pleased to announce an exhibition by Spanish artist Jorge Galindo to be held at its Schloss Derneburg location. A suite of Galindo’s new monumental flower paintings will be shown alongside a group of works realized last year in collaboration with internationally-acclaimed and award-winning filmmaker, Pedro Almodóvar.

Over the past thirty years, Jorge Galindo has made gestural and expressionistic paintings which often synthesize elements of collage. Using a range of materials, his lush and colorful surfaces are executed in an energetic, sometimes chaotic style. In his new flower paintings, Galindo depicts the classic subject of the still life on a monumental scale. Painted onto canvases with a patchwork quality, Galindo’s bright and energectic paint handling renders his subject in a manner that borders on abstraction.

Galindo and Almodóvar worked together over a period of a year to create the Flores de periferia works. Galindo invited Almodóvar to collaborate after seeing his exhibition of small format still life photographs of “peripheral” flowers (suicide flowers that grow within train tracks and are destined to be crushed) in vases. Following in the tradition of artists such as Giorgio Morandi and Francisco de Zurbarán, who were both known for painting still lives of commenplace objects such as vases, bottles, bowls, fruit and flowers, Galindo proposed to enlarge Almodóvar’s photos and use them as the ground for a series of paintings. In realizing the Flores de periferia works, Galindo and Almodóvar worked simultaneously, applying paint to the photographic base images with brushes, their hands, arms and feet, abstracting the original photographic works into boldly colorful and gestural paintings.

Jorge Galindo was born in 1965 in Madrid, Spain. In the late 1980s and early 1990s, he pursued academic training in workshops offered by the Círculo de Bellas Artes of Madrid, where a course taught by Julian Schnabel in 1991 had a particularly significant impact on his artistic development. Since the late 1980s, solo exhibitions of his work have been held throughout Europe, North America and South America. Galindo currently lives and works in Borox, a municipality located in the province of Toledo, Castile-La Mancha, Spain.

Pedro Almodóvar (b. 1949) is a Spanish filmmaker, director, screenwriter, and producer. Widely considered to be one of the most internationally successful Spanish filmmakers of all time, he came to prominence as a director and screenwriter during La Movida Madrileña, a cultural renaissance that followed the end of Francoist Spain. His critically-acclaimed films include Women on the Verge of a Nervous Breakdown (1988), Tie Me Up! Tie Me Down! (1990), High Heels (1991), Live Flesh (1997), All About My Mother (1999), Talk to Her (2002), Bad Education (2004), Volver (2006), Broken Embraces (2009), The Skin I Live In (2011), Julieta (2016) and Pain and Glory (2019). Almodóvar has won countless awards for his work, including two Academy Awards, five British Academy Film Awards, six European Film Awards, two Golden Globe Awards, nine Goya Awards, and four prizes at the Cannes Film Festival, as well as the French Legion of Honour and the Gold Medal of Merit in the Fine Arts from the Spanish Ministry of Culture. In 2019, he was awarded with an Honorary Golden Lion at the 76th Venice International Film Festival. 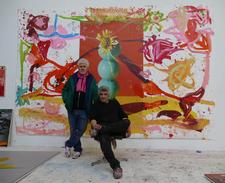