The Hall Art Foundation is pleased to announce an exhibition by American artist Leon Golub to be held in its galleries in Reading, Vermont from 21 May – 27 November 2022. Known for expressive figurative paintings that explore man’s relationship with the dynamics of power, this survey brings together approximately 70 works from the Hall and Meyer Collections that span Golub’s career from 1947 to 2003.

Leon Golub believed that art must have an observable connection to real world events to have relevance for the viewer. Since the 1940’s, he created paintings that are psychological, emotive and deliberately up front – as topical today as when they were first made. Working in a distinctive figural style influenced by classical and primitive art, photography, print and broadcast media, Golub depicts scenes of private and public conflict to investigate the frequent and complicated ways in which power is abused. His works challenge the stereotypical polarities of victim and aggressor, while balancing an investigation of modern-day political problems with timeless and universal human issues.

What you’re doing is, you are trying to make some kind of report. I’ve tried to deal with situations of stress, and violence, and so on. There is virtually no location where enormous types of violence have not occurred or are going to occur or are happening right at this minute. […] One of the major histories of our time has to be what people do to each other on a continuous basis, and there is relatively little art that deals with this.
(Leon Golub in Leon Golub, While the Crime is Blazing: Paintings and Drawings, 1994-1999. (New York: Bucknell University, 1999), p. 4)

Many of Golub’s earliest works from the 1950’s and early 1960’s feature as their subject a singular totemic male figure. Referencing classical antiquity, these bodies often resemble kings, warriors, and shamans. Roman portrait busts were a particularly important source for Golub’s series of colossal heads. In works like Head (XXXVII) (1959), the expressionistic, distorted and highly textured rendering of the male visage suggests psychological torment and turmoil.

By the late 1960’s, Golub’s depictions of conflict are less inwardly focused. Executed on a large, un-stretched canvas, the two men in Combat II (1968) are generalized representations of the male figure engaged in a battle, with abstracted bodies that appear raw, composed of exposed tendons and muscle. Gigantomachy III (1966) is a modern revision of a classical frieze format for which Golub also used photos of contemporary athletes as reference. It depicts a group of men arranged horizontally across the picture plane, violently kicking a prostrate body on the ground. By presenting several unidentified figures in combat in an ambiguous, a-historical environment, Golub’s works from this period represent the universal nature of violence, of war and its potential for destruction.

In the mid 1970’s, Golub began producing an extensive series of portraits of public figures – exploring the “face of power” of political leaders, dictators, corporate directors and religious figures. Working from photographs gathered from newspapers and weekly magazines, his subjects include Fidel Castro, Leonid Brezhnev, John Foster Dulles, Gerald Ford, Francisco Franco, Henry Kissinger, George Wallace, and Mao Tse-Tung, among others. In Kissinger III (1978), Golub employs a characteristic technique of scraping away paint to reveal a flat, almost ghostlike portrait surrounded by bare ground. Golub often went on to produce several portraits of the same man at various points in his life – chronicling the evolution of each man’s media persona as shaped by the public eye.

Golub transitioned from depicting generalized or “universal” combat scenes.  Drawing on political events taking place in the United States and abroad, his nude figures in action were brought “into the real” through the addition of contemporary details like clothing, guns, and gear. Golub continued to use found photographs from newspapers and magazines as source material for his paintings – building a scene by overlapping various fragments of found and often unconnected imagery. In works from his Mercenary series such as Mercenaries IV (1980), Golub portrays the professional soldiers who are hired to carry out state-sanctioned acts of violence.

In White Squad X (1986), Golub expands on his earlier investigation of state-sanctioned violence by depicting acts of brutality committed by the police rather than the military. This scene shows two plain-clothed police officers arresting another white man. The arrestee’s head, pushed into the ground, is the point of intersection between one figure’s power and another’s vulnerability. Executed on a monumental un-stretched canvas, Golub employs his characteristic and arduous technique of layering paint onto the surface of the canvas, then scraping it away with a meat cleaver. The angular gestures and menacing postures of the police officers are sourced from various magazine and newspaper clippings. The three men are placed against a background of flooded red oxide, forcing them out into the viewer’s space and amplifying the sense of menace.

Born in Chicago, Illinois in 1922, Leon Golub worked as an artist, activist, writer, and teacher until he died in New York City in 2004. He received a BA from the University of Chicago, and a BFA and MFA from the School of the Art Institute of Chicago. Golub’s work has been featured in numerous solo exhibitions throughout the United States and abroad.  He was a member of the American Academy of Arts and Letters and a 1996 recipient of the Hiroshima Art Prize (jointly with his wife, artist Nancy Spero).  His works are included in major museums and public collections worldwide. 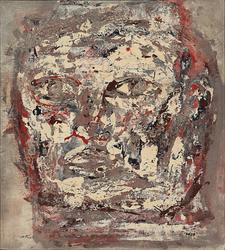 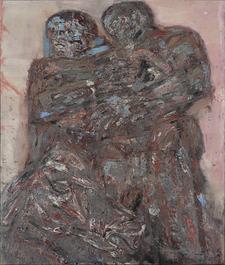 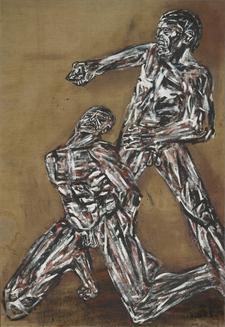 Acrylic on linen; unstretched with grommets at top edge 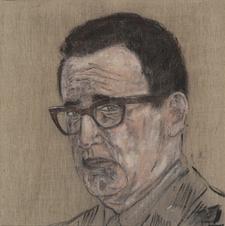 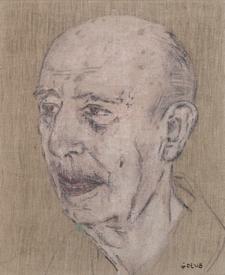 Acrylic on canvas; unstretched with grommets at top edge 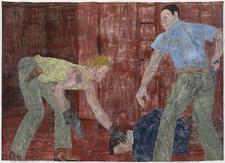