The Hall Art Foundation is pleased to announce an exhibition by American artist, Katherine Bradford to be held at its galleries in Reading, Vermont from 15 May – 28 November 2021. Bradford is best known for making luminous and dreamlike works that merge color field painting with figuration. Employing a direct and often whimsical language of composition, Bradford’s paintings depict an imagined view of the world that prompt an introspective look at the complex forces of thought and emotion that comprise the human experience. Philosophers' Clambake includes over a dozen paintings created in the past ten years.

Throughout her career, Bradford has repeatedly featured swimmers and bodies of water in her paintings. In works like Pool Swimmers, Green (2015), Distant Life Guard (2018), and Large Ocean Painting (2016), swimmers are set amongst a textured and semi-transparent ground. Although these blocks or bands of color signify a representational space – a pool, the ocean – they are also abstract fields of pigment, studies of color and light. Wading, swimming, floating or treading, the figures themselves are rendered as reduced, fragmented and faceless patches of color. Their anonymity gives them an everyman quality. Painted in bright pinks, peaches, oranges and neon greens, they appear to glow from within, illuminating their backdrops.

In works like Philosopher's Clambake (2010), Beautiful Lake (2009), Holiday After Dark (2018), and Shore Diptych (2020), Bradford depicts groups of people in a gathering, negotiating a shared space and each other. In Beautiful Lake, simplified peach-colored figures stand within a tranquil, night-lit lake, surrounding, and seemingly urinating into, a bright blue pond in the center of the composition. Holiday After Dark shows several pink and red bodies in various states of suspension floating in a dreamlike cosmos around a mysterious circular field that can simultaneously be interpreted as a swimming pool or perhaps as a hole to the center of a galaxy. In the show’s titular painting, Philosopher’s Clambake, a group of suited scholars pontificate with themselves and each other around a colorful and brightly lit bonfire.

Katherine Bradford: Philosophers' Clambake is presented in conjunction with Deep Blue, a group show curated by Bradford that examines “deep blue” both visually as a color, but also as a phrase that can describe more abstract concepts such as mood, the natural environment, music and even a region’s political landscape. Over 70 paintings, sculptures, photographs, works on paper and videos by 70 artists from the Hall and Hall Art Foundation collections will be included. 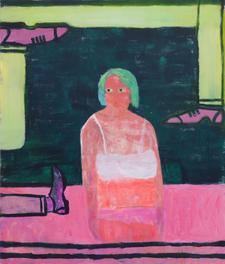